Spooky films go hand in hand with Halloween, but where do you sit on the spooky scale – perhaps you’re more of a fan of easy-watching camp classics like Hocus Pocus? Or are you more of a die-hard fan of jump-scare films that’ll have you spilling your popcorn? 🍿 Either way, Everyman Cinema at Metquarter has a jam-packed schedule of films that’ll tickle your tentacles.

Not a huge amount of people ever saw Hocus Pocus during its original theatrical release (who releases a Halloween film in July anyway?), but over the years, Hocus Pocus has attracted a cult following thanks to the pure magic and fun that Bette Midler, Sarah Jessica Parker and Kathy Najimy bring to the screen.

If you’ve been living under a pumpkin and don’t know the deal with the Sanderson sisters, a group of school children accidentally free a coven of evil witches and must spend the night with a magical cat to steal the witches’ book of spells to stop them from becoming immortal. 🐈‍⬛

With screenings throughout Halloween week, you can book your tickets here. 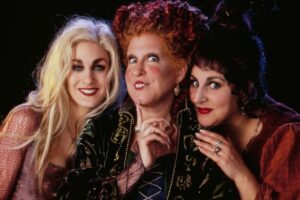 Another epic cult classic (with an incredible theme song), Ghostbusters has an all-star cast of comedy greats like Bill Murray, Dan Aykroyd and Rick Moranis and Sigourney Weaver. The team decide to become ghostbusters to wage a high-tech battle with supernatural beings after losing their jobs at a New York university. They stumble upon a gateway to another dimension and must work together to save the city!

As part of the Throwback season of screenings, each ticket to Ghostbusters includes a complimentary drink (ectoplasm optional), and a hot dog or a pizza. The film is showing on Saturday 30th October, book your tickets here. 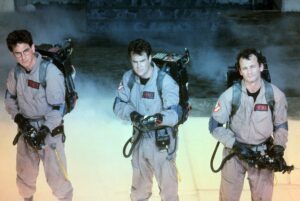 Smile is a brand new film for 2022 and has got everyone talking thanks to its viral marketing tactics of planting creepy smiling strangers in public.

Sosie Bacon stars as Dr Rose Cotter, who after witnessing the bizarre suicide of a patient, goes through increasingly disturbing and daunting experiences, leading her to believe what she is experiencing is supernatural.

This one is higher up on the spooky scale, so make sure to grab some popcorn to hide behind! Book your tickets here. 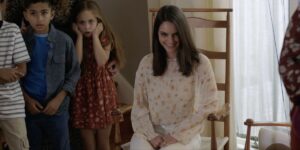 One of horror’s most famous characters Michael Myers (no, not the Shrek one) is back in one of the most acclaimed, revered horror franchises in film history.

Laurie Strode (Jamie Lee Curtis) faces off against her long-time tormentor Michael Myers, in a final confrontation unlike any captured on-screen before. Four years after the events of last year’s Halloween Kills, Laurie is living with her granddaughter and is finishing writing her memoir – Michael hasn’t been seen since.

After a young man is accused of killing a boy he was babysitting, it ignites a cascade of violence and terror that will force Laurie to finally confront the evil she can’t control, once and for all. 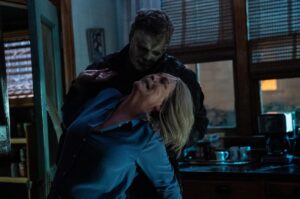 OK so this one isn’t actually Halloweeny at all, but if you’re of a nervous disposition then maybe a classic superhero film is all you need to get your adrenaline running this Halloween.

Black Adam is part of the DC Comics universe (Superman, Aquaman, The Flash) and features Dwayne Johnson as the titular character who was bestowed the almighty powers of the gods.

After using these powers for vengeance, he was imprisoned, becoming Black Adam. Now free, his unique form of justice, born out of rage, is challenged by modern-day heroes who form the Justice Society: Hawkman, Dr. Fate, Atom Smasher and Cyclone.

Expect plenty of fighting, superpowers and plenty of those classic Dwayne Johnson smoldering stares that we’ve grown to love over the years.

If that’s not enough cinema excitement for you, Everyman is also screening films such as Don’t Worry Darling, The Banshees Of Inisherin and Lyle, Lyle Crocodile. Check out the full listings here.